A Bipolar, A Schizophrenic, and a Podcast 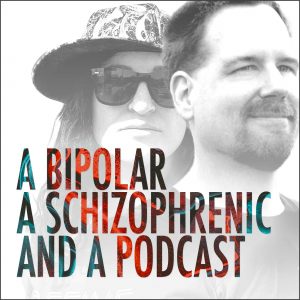 Its original run ended in 2019 after garnering massive praise in the mental health community and boasting tens of thousands of listeners. Now back for a limited run of 10 episodes with the first episode launching on January 4th, 2022. Episodes weekly through the end of the season.

The podcast is hosted by Gabe Howard and Michelle Hammer. Learn more about them here and subscribe or follow below (it’s free!):

Bonus episode filled with outtakes and additional information. Put together by the show’s producer and editor, Lisa Kiner. Tune in if you want to learn more about how the show is made and how much work goes into the back-end.

“I zone out on a train and I talk to myself on the trains and I was out of it on the train. I kind of left that part out, didn’t I?”

For the final episode of season 2, we play Two truths and lie. Gabe covers eating disorders, inappropriate behavior, and his hatred of language policing. Michelle covers zoning out, disclosing her diagnosis, and takes us back to her freshman year...

Why don’t we ever talk about how despite our best efforts, we are depressed? Now, let’s figure out how to move forward.

We’ve all heard the adage, “An ounce of prevention is worth a pound of cure.” When it comes to depression, however, this expression holds even more significance. For one thing, there is no “cure” for depression, so prevention is obviously...

“People don’t want to see a therapist because they think that means they’re crazy. But, who decided that?”

Today, we discuss the pros and cons of therapy. What it is, why it works, why it doesn’t work, and every tangent in between. Spoiler Alert: One host loves therapy and the other host doesn’t love therapy. Listen in now.

It’s called suicide, but it should be called death from mental illness. We don’t die from “cancer-cide”, as an example.

Last summer, Michelle Hammer’s friend died by suicide. In this heartfelt and vulnerable episode, Michelle discusses her emotions about her friend, including her anger and confusion. Both hosts discuss why it would be better if people saw suicide for...

Why you gotta turn my nail biting into some big mental thing. I just bite my nails, why are people making it such a big thing?

Nail Biting. Hair Pulling. Skin Picking. All of these “bad habits” fall under the category of Body Focused Repetitive Behaviors or BFRBs. In today’s episode, Gabe and Michelle discuss their issues with BFRBs and some potential solutions — though...

“Have we gone so far that the actual definition of mental illness has been lost and it has been sort of retconned to mean different?”

“Hauntingly beautiful,” “ride the lightning,” and even famous quotes like “we’re all mad here” are often used to positively describe mental illness. It’s the “every cloud has...

“I talk to people who aren’t there. I’ll have hallucinations pretty much on a weekly basis, even medicated.”

Kody Green, better known as the schizophrenic hippie, is a TikTok sensation — among other things. But did you know that this podcast inspired him to start his channel? Our hosts were just as surprised...

Podcast: Loved Ones Distrust Us Due to Our Mental Illness

“. . . nobody wants to walk through hell, come out the other side and [Have someone] say, Well, but you’re mentally ill.

How garbage is that? It’s garbage.”

Recovery is hard to both achieve and maintain when it comes to mental illness. It’s a long journey and in its wake are mistakes, missteps, and relapse....

So it’s like spend your money, have less money, get on Medicare or have more money, have no health insurance. . .

It doesn’t make any sense. You’re stuck in an endless cycle.

Bipolar and schizophrenia can make handling finances challenging — to say the least. Even famous pop stars like Britney Spears have had well documented issues managing money.