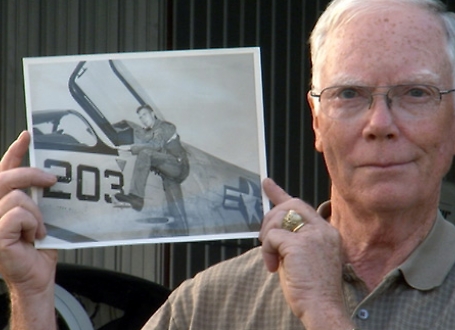 Bob Shumaker was born in Pennsylvania, the son of a lawyer and a writer.  After graduating from public schools he attended Northwestern University for a year and then the United States Naval Academy where he was a boxer, a cross-country runner and a scholar.

After graduating in 1956 he attended flight training and eventually joined VF-32, a fighter squadron in Jacksonville, Florida. He was a finalist in the Apollo astronaut selection, but a temporary physical ailment prevented his selection. In 1964 he graduated with a master’s degree in aeronautical engineering from the United States Naval Postgraduate School and then joined VF-154 in San Diego, California. About this time he married Lorraine.

Shortly after the birth of his son, Bob was deployed to Vietnam. In February 1965, while flying an F8 Crusader, he was shot down on a mission over North Vietnam, was captured, and spent the next eight years as a POW. Like other prisoners who endured years of solitary confinement, torture, and uncertainty about their fate, Bob’s experiences in captivity made him more resilient. He survived as a prisoner by imagining the house he would build for his family once he was released and by communicating with other prisoners through a series of coded knocks on the pipes in his cell. His fellow POWs consider him a resister, leader, and patriot.

In 1973, he was repatriated and resumed studies, which eventually led to a doctorate degree in electrical engineering. As a Captain he was a government project manager for smart missiles at the Naval Air Systems Command. In 1983, he was promoted to the rank of Commodore and became the Superintendent of the Naval Postgraduate School in Monterey, California. At the Pentagon in 1986, as Rear Admiral, he was responsible for coordinating the research efforts of the Navy’s air, surface, electronics, and space activities. He retired from the Navy in 1989 and became an assistant dean at The George Washington University and later became the associate dean of the Center for Aerospace Sciences at the University of North Dakota, from which he retired in 1991.